Apache Ignite .NET in-memory cache provides ICacheStore API for write-through and read-through to and from an underlying persistent storage respectively (e.g. an RDBMS like Oracle or MSSQL, or NoSQL database like MongoDB or Couchbase). 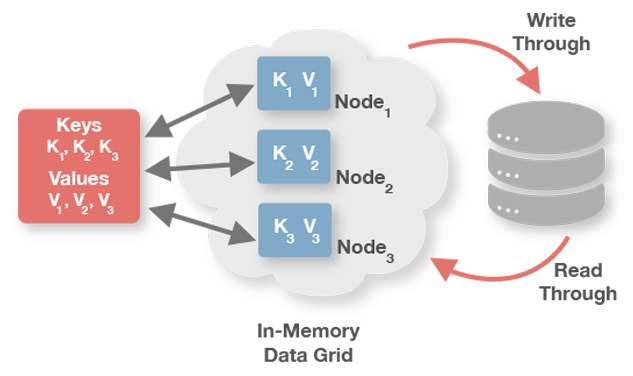 To configure read-through and write-through, you need to implement ICacheStore interface and set cacheStoreFactory as well as readThrough and writeThrough properties of CacheConfiguration in Spring XML, as shown in examples below.

In a simple write-through mode each cache put and remove operation will involve a corresponding request to the persistent storage and therefore the overall duration of the cache update might be relatively long. Additionally, an intensive cache update rate can cause an extremely high storage load.

For such cases, Ignite offers an option to perform an asynchronous persistent store update also known as write-behind. The key concept of this approach is to accumulate updates and then asynchronously flush them to persistent store as a bulk operation. The actual data persistence can be triggered by time-based events (the maximum time that data entry can reside in the queue is limited), by queue-size events (the queue is flushed when it’s size reaches some particular point), or by using both of them in combination in which case either event will trigger the flush.

With the write-behind approach only the last update to an entry will be written to the underlying storage. If cache entry with key key1 is sequentially updated with values value1, value2, and value3 respectively, then only single store request for (key1, value3) pair will be propagated to the persistent storage.

Batch store operations are usually more efficient than a sequence of single store operations, so one can exploit this feature by enabling batch operations in write-behind mode. Update sequences of similar types (put or remove) can be grouped to a single batch. For example, sequential cache puts of (key1, value1), (key2, value2), (key3, value3) will be batched into a single CacheStore.putAll(...) operation.

ICacheStore interface in Ignite .NET is used to write and load data to and from the underlying data store.

ICacheStore is fully transactional and automatically merges into the ongoing cache transaction.

ICacheStore.LoadCache() method allows for cache loading even without passing all the keys that need to be loaded. It is generally used for hot-loading the cache on startup, but can be also called at any point after the cache has been started.

In case of partitioned caches, keys that are not mapped to this node, either as primary or backups, will be automatically discarded by the cache.

Methods Load(), Write(), and Delete() on the ICacheStore are called whenever methods Get(), Put(), and Remove() are called correspondingly on the ICache interface. These methods are used to enable read-through and write-through behavior when working with individual cache entries.

Methods LoadAll(), WriteAll(), and DeleteAll() on the ICacheStore are called whenever methods GetAll(), PutAll(), and RemoveAll() are called correspondingly on the ICache interface. These methods are used to enable read-through and write-through behavior when working with multiple cache entries and should generally be implemented using batch operations to provide better performance.

Ignite has a concept of store session which may span more than one cache store operation. Sessions are especially useful when working with transactions.

The main purpose of cache store session is to hold the context between multiple store invocations whenever ICacheStore is used in a cache transaction. For example, if using a database as a persistent store, you can store the ongoing database connection. You can then commit this connection in the ICacheStore.SessionEnd(boolean) method.

CacheStoreSession can be injected into your cache store implementation via [StoreSessionResource] attribute.

ICacheStore interface can be set on CacheConfiguration in code or in app.config, or in Spring XML via PlatformDotNetCacheStoreFactory.